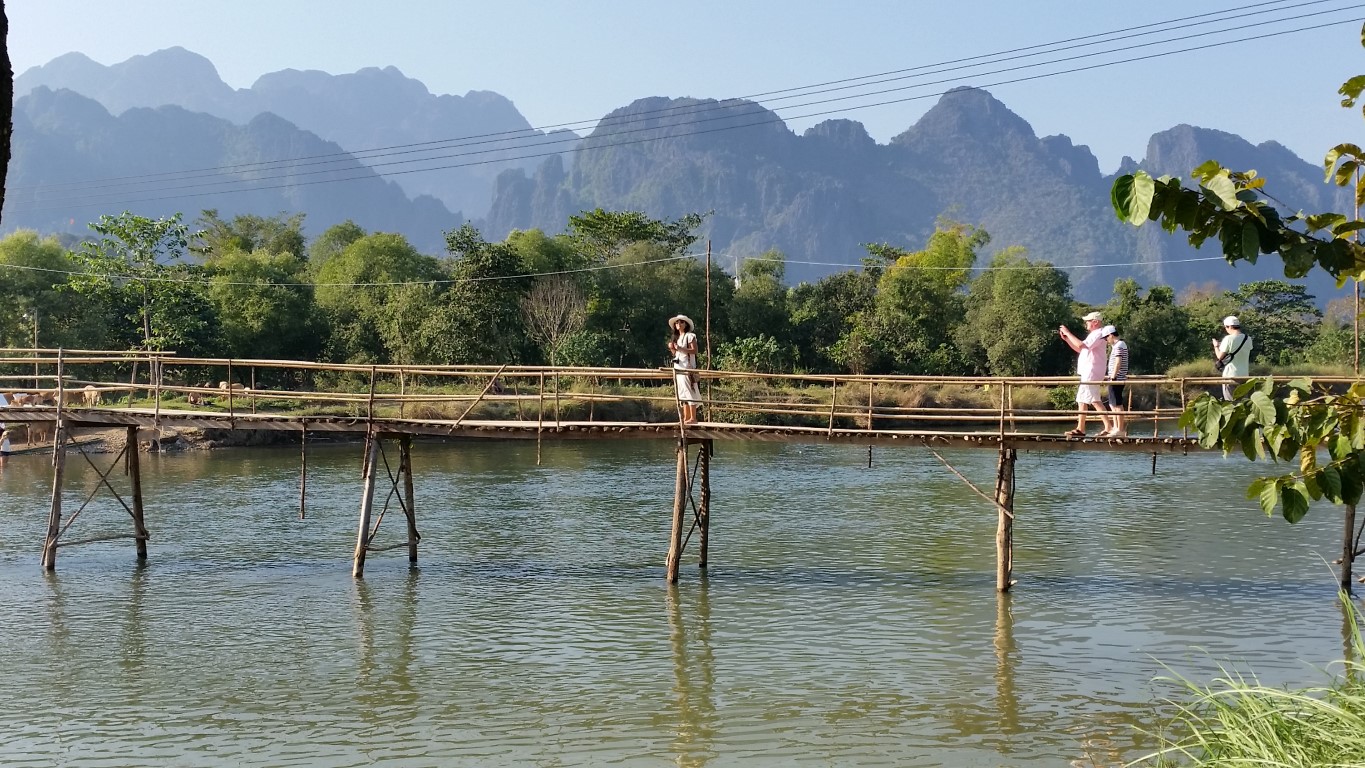 You usually end up in Vientiane when arriving Laos, So to get to Luang Prabang I decided to go by bus and stop over in Vang Vieng. Vang Vieng was known as the party capital of SE Asia – ironic that it is in in the middle of a [quiet] landlocked country. It was a back-packer mecca – not my kind of place. After 34 deaths in 2011-12 the Government clamped down and tidied the place up a little. I would shudder to see what it was like prior to 2015. Here is a glimpse what may give you some idea.

Vang Vieng is still very much a back-packer place.  Web sites will say “Vang Vieng has gone from a lurid mass of partying backpackers to a relatively peaceful riverside town with stunning scenery” but I beg to differ. The bars are still loud, cheap beer flows, many people are shirtless despite many signs (being shirtless is highly offensive in Lao culture). It is constant party noise – totally ideal if that is what you are looking for. It is a spectacular place with amazing limestone cliffs surrounding the town and river that slowly flows through.

I walked around the town centre, it only consists of a few streets. it was a little confusing how to get from the bus station into town but a shared tuk tuk sorted that out. We all thought the driver wanted 70,000 kip each which is way too much but it ended up 20,000 each – which is probably still overpriced. I had never seen to many tourists in the same place. It felt a little odd. I had noticed a very large number of Korean tourists in Laos this time.

Town was rather uninteresting, I grabbed a cooked sausage from a street vendor and headed to the local herbal sauna to spend the afternoon relaxing.

Local saunas are usually raised with a boiler under them like this one. I had to use Internet photos here as I don’t like to get my camera out at a sauna.

The steam is intense. It is infused with the herbs that are either boiled in the boiler or placed over the steam outlet. I can last 5-10 minutes and then have to exit and have a hot tea. In 30+ degrees it is surprisingly refreshing and a very pleasant way to unwind. The steam is intense Stoking up the sauna

It is often quote dark inside with two narrow benches each side, so when first entering it can be a little interesting finding your way to a spare seat.

In the evening it are a roll from this lady right outside my guesthouse. What could be easier? The morning came and I wandered a few blocks towards the river and came across a restaurant totally empty. Everyone must have been either hung over or gone rock climbing. I favour the first option. What an amazing place to have breakfast. I went for the pad thai. It was lovely and peaceful just what I needed after a busy few days. I had decided to hire a bicycle and explore further out. Maps were hard to come by and the roughly drawn and photocopied may the bike vendor gave me was difficult to follow and I’m good with direction. I took off and soon discovered plenty of bumpy and dusty roads. It was hot, 40 degrees. I quickly got sunburnt for the first time ever in Laos. The roads were very dusty and I could feel my insides clogging up. I usually bear a lot of dust and smoke but this was really getting to me. Unseen in this photo but packs of Koreans and 4 wheeler dirt buggies were extremely popular which engulfed me in a dust cloud. I ended up turning back. I’m pleased I took two days to see Vang Vieng but I’m happy to leave it to the back-packers. It was too dusty, hot, noisy and uninteresting. I got the bus 8 hours early and took off at 9am for the 7 hour ride to Luang Prabang. Luckily the bus was only an hour late.