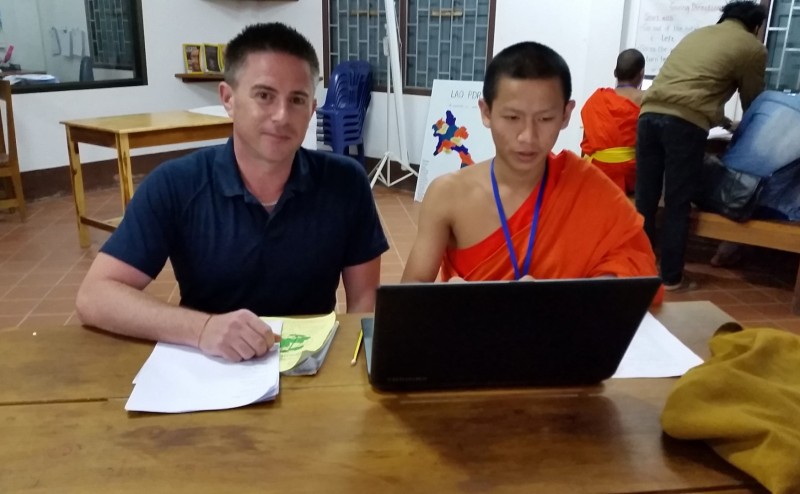 Students at computers in class in the library

Earlier this year I taught 4 classes a day from 10am to 8pm, using the 10 laptops in the library. They were initially full of viruses and spyware which took some time to clean up before classes could begin. This year I taught the beginner stream – students who understood basic English.

Luckily their usual Lao teacher was on hand to translate some or technical words. We covered the basics of computers, Internet searching, using Google effectively, how to translate websites from English to Lao, staying safe online, and the basics of using Word to create documents.

Lao students love tests and writing things down, so a quick test was written for classes using Google to put their new research skills to the test.

Since leaving, one class a week is now conducted in the library on the laptops which are available. The school recently has secured 20 computers donated by the World Bank and have asked me to set up these computers permanently with the network to enable all 200 students to go through computing classes in the future. David with students in computer class

I was really impressed with how hard the students applied themselves in class. It was not unusual for many people to remain behind after the 90 minute class finished continuing to practice what they had learnt in class. During the time I was there the library was full with students using the computers practising their new-found skills.

Due to the generosity of the contact I have in Auckland, I have been offered 50 secondhand laptops to be used in Laos. Whilst the school has secured extra computers for their own use the laptops would be invaluable to be used by other schools in the area and by families at home the otherwise they would not be able to afford will have access to such technology. Unfortunately the cost of getting these computers there at the moment is $2015.20 New Zealand dollars and I’m currently looking at ways that we could get at least some computers over to Laos to be used by people so they can improve their computing and education skills. The New Zealand shipping company has provided their services free of charge however some further sponsorship may be required to be able to ship these.

I am very excited to have been asked by LEOT, to not only to set up a permanent computing facility for the school but also to be part of the interviewing panel for the selection of new students for the coming year beginning in September. I will also be working with a volunteer from the United Kingdom and developing the computer curriculum and implementing this I training the teachers at LEOT and also with students.