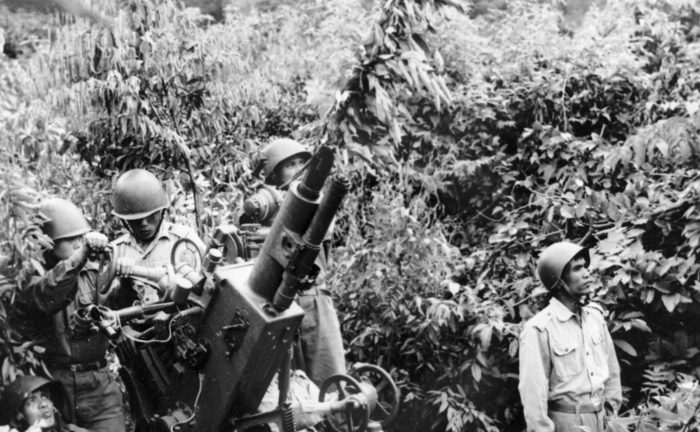 Abandoned in 1975 in one of the last acts of the war, Long Chieng was once the busiest airport in the world and has been off-limits for 50 years.

Half a century after North Vietnamese sappers scaled sheer 200-meter cliffs in the dead of night to overrun a strategic US Air Force radar installation on the western rim of Phou Pha Thi, the Lao government is finally opening the towering limestone massif to domestic and apparently foreign tourists.

Once locked in remote jungle fastness, northeast Laos’ tallest peak is a scenic attraction itself, but the official opening of a steel staircase to allow visitors access to its eastern ridge-line is expected to come on the 50th anniversary of the one of the North Vietnamese Army’s (PAVN) greatest feat of arms.

Construction crews have still not finished carving a 60-kilometer all-weather road through rugged country from the wartime Pathet Lao headquarters of Sam Neua to Houayma, a Hmong tribal settlement at the eastern end of the seven-kilometer-long escarpment.

But a secondary road has replaced the dirt track from Houayma to the foot of Phou Pha Thi, where a new information center marks the beginning of the new staircase, winding several hundred meters up a steep slope to an army post on a small plateau.

From there, officialdom permitting, it will be a tough slog along the mountain to reach the site of the US’ former ‘Project Heavy Green’ radar installation, which was obliterated by concerted US airstrikes after falling into Vietnamese hands in the surprise pre-dawn assault.

An aerial view of the newly built staircase to the site of the CIA’s former installation at Phou Pha Thi mountain. Photo: Ian Gatenby

It is not clear who paid for the staircase, but in apparent competition with the Chinese, Hanoi is funding new roads stretching 58 kilometers west from Houayma to Mueang Xon, then north to the Vietnamese border, allegedly for use by logging trucks.

As a so-called revolutionary monument, Houaphan province officials have long been keen to add Phou Pha Thi to the province’s other big tourist attraction, the Viengxa caves, 20 kilometers west of Sam Neua, which were home to 20,000 Pathet Lao soldiers during the Indochina conflict.

Up until now, the few foreign motorcycle adventurers who have sought to approach Phou Pha Thai have been turned away by Lao government soldiers for security reasons, perhaps because of unexploded ordnance littering its lower slopes.

Known to the Americans as Lima Site 85, located deep inside territory held by Vietnamese and Pathet Lao forces, the radar was established in late 1966 to direct F-105 fighter-bombers in raids aimed at degrading North Vietnam’s surface-to-air missile system.

Lying just 40 kilometers west of Sam Neua and 200 kilometers from downtown Hanoi, it proved to be an inviting target for a specially trained platoon of elite Dac Cong commandos, who stormed the site on March 11, 1968, killing 11 American technicians.

It was the USAF’s largest ground combat loss and only the bodies of two of the missing servicemen were recovered from the mountain’s slopes by the US Joint POW-MIA Accounting Command and Vietnamese and Lao searchers between 1994 and 2005.

The sappers reportedly lost only one dead in the battle, but according to the sole survivor – a relative of a Vietnamese official now married to an Australian journalist – the entire platoon was wiped out in a B-52 strike during the siege of Khe Sanh in South Vietnam some months later.

Pathet Lao soldiers with anti-aircraft gun aimed at US aircraft during the ‘secret war’ in Laos in 1968. Photo: AFP

Supporting communist forces killed more than 40 Hmong and Thai defenders guarding a Central Intelligence Agency (CIA) post and runway just below the radar site; two case officers and four other Americans were evacuated by helicopter at the height of the battle.

The commander of the Thai forces, who was away at the time having dental work, was communications expert Lieutenant Chamlong Srimuang, later to become one of the leaders of Thailand’s 1981 Young Turks coup which only failed because of the intervention of then King Bhumibol Adulaydej.

Local residents and frequent travelers to the Lao hinterlands say it is unlikely the Vientiane government will also relax access to Long Chieng, the mist-shrouded valley in central Laos’ Xaysomboun province that served as the nerve center of the CIA’s so-called ‘secret war.’

Driving along the rutted 1,350-meter runway, it was not readily apparent to this correspondent during a specially approved visit in 2013 why the old base with its 1,000 inhabitants and small detachment of soldiers was still off-limits to outsiders.

Overlooked to the north by the once heavily-defended Skyline Ridge, the picturesque valley is hemmed in on other sides by jagged limestone karsts, including one outcrop at the end of the runway known as the ‘Vertical Speed Brake.’

Abandoned in 1975 in one of the last acts of the war, Long Chieng was once the busiest airport in the world, home to Lao Air Force T-28 bombers and Pilatus Porters, Helio Couriers and an assortment of helicopters, mostly flown by Air America and Continental Air Services.

Although the valley itself now seems at peace, government security concerns stem from continuing pin-prick attacks by ethnic Hmong rebels, descendants of the 20,000 CIA-backed tribal guerillas who, along with 21,000 Thai mercenaries, fought communist forces to a virtual standstill.

Once designated a special security zone, Xaysomboun was supposedly opened to the tourism in 2015, but the 3,000 meter Phou Bia, the country’s highest peak, remains a rebel sanctuary and other scenic attractions are still not safe to visit.

Many of the attacks go unreported, but only last June the Chinese embassy in Vientiane issued a safety warning to its citizens after a Chinese worker was ambushed and killed at a road construction site in Long Chieng district, north of the Australian-operated Phou Bia gold mine.

It was not the first time the Chinese have been targeted. In January 2016, two more workers were killed when their car triggered an improvised explosive device in the same area and two months later another Chinese national died in an attack in neighboring Luang Prabang.

China is expected to forge ahead of Vietnam and Thailand in the struggle for influence in Laos when it completes the 414 kilometer, US$5.8 billion railway connecting China with the northern Lao border town of Boten to Vientiane as part of its ambitious Belt and Road Initiative.

The new link, filling an important gap in the Trans-Asia railway network, is expected to be in operation by late 2021, turning the land-locked communist state into what Lao officials are enthusing will become a “land-linked” country. Given its route through Namtha, Luang Prabang and Vang Vieng, it is unlikely to experience any serious security issues.