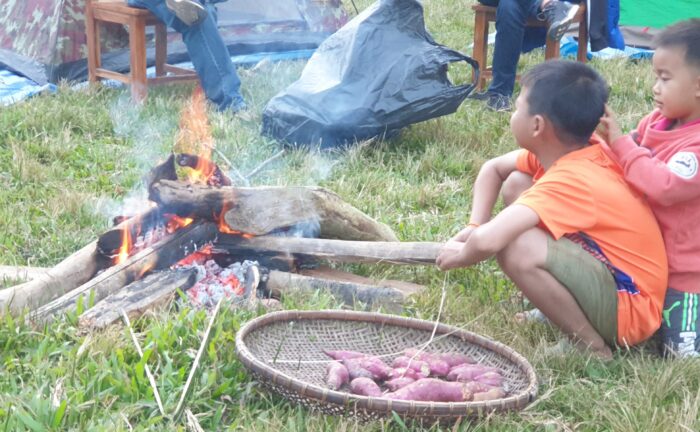 This past weekend I was invited to help a remote village about 3 hours out of Luang Prabang with a new roof for the school, clothes and blanket (it’s almost cold season).

About an hour south of Luang Prabang we stopped at Xiang Ngeun at the top of the hill. Lovely views (including the new resettled village below). The owners keep a monkey on a short leash, it doesn’t seems totally bat-shit crazy yet and I guess it’s arguably better than being released to the jungle only to be shot.

I had one of the best Pho noodle soups ever, on the main road just before the turnoff to the dirt road.

After another hour (the bum is getting a little sore on the motorbike) we turn off onto a dirt road which we follow for 25 mins and get a glimpse of the Khmmu village.

There are 60 houses in the village, mainly bamboo houses with the odd concrete block home. A beautiful river, with a very strong current, surrounds two sides of the village. I joined the locals in a spot of fishing and swimming.

At about 3pm the students arrived at the school along with the kind folks that brought donated supplies and clothes.

Teachers and parents found clothes for children and themselves. The young “panda hat” boy is prepared for a chilly December.

We set up tents for the night on the school grounds; schools almost always tend to be at the end of the village. Some kind locals got a fire going for the night. We had a freshly killed goat. Unfortunately for me the stomach ‘bile’ also went into the soup – a little bitter for me. The sticky rice and pumpkin was delicious though.

The village had not had visitors or a ‘party’ for a while and were very appreciative. Some talented person played drums with a bucket, a Beerlao crate and a pot lid.

Sunday morning arrived and one of the families had been out hunting and had some small birds to eat.

The small fish we caught in the river earlier was added to the fire. Evidently, these fish don’t grow much larger.

With the village being so remote, the Khmmu people who live here have to be hunters in order to eat; catching fish in the river, birds and rats from the jungle.

I don’t think I’ve ever seen so many puppies in one village, it is definately puppy season!

Almost time to leave we decided to buy some coconuts and a father raced up a tree in seconds. A few coconuts fell and split and his kids loved the opportunity to drink the fresh juice.

I’ve seen the village of Xiang Ngeun a number of times so this time I decided to take a small detour and check out the village. From above it looks like a thousand little houses on the hill.

It was good to be away from the city for a few days. It’s always a privilege to be invited and share time with people in remote villages. Life is not easy for these people, but I do like the beauty of sharing a simpler life together.

A simpler life; without electricity, busy work schedules and all the distracting mod-cons of city-life. I am sure town folks would find it difficult to survive village life and villagers would be intrigued by city life and its conveniences, and opportunities if they could afford to live in such a place. Most of these lovely people will live here their whole lives, with their families – perhaps they know they have what city-folk dream of – however there is always the issue of scarcity.