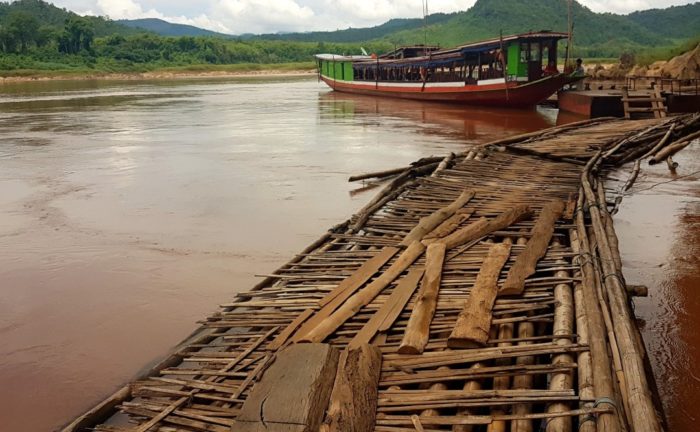 Kayaking the Ou and Mekong river to Luang Prabang I decided this week to take a day off and go kayaking down the Mekong River from just north of Pak Ou caves. I’ve visited the caves a few times before but never via the Mekong or kayaking.

So I joined a tour and set out by tuk-tuk about an hour north of Luang Prabang. After 10 minutes, we stopped and picked up life jackets and kayaks etc from the driver’s house.

It all seemed a bit disorganised, not to my surprise, but it was great chatting with the guy I was sharing my tuk-tuk with. It would have been a different story for him he said if he was alone. We wondered why we were the only two onboard when there were nice sets of kayaking gear. We stopped at a Khmu village to wait for our guide. There was a stall nearby so we had an instant coffee and played with newly hatched chicks while they fed.

We wandered the Khmu village, it seemed very small. Not far up a nearby hill via a tar sealed road, we saw a large housing development for villagers as the dam progresses and forces them to relocate to their new village.

The tuk-tuk departed and we met a family of four and two guides who had been trekking from the day before.

We geared up and spent the new few hours kayaking down the river. We stopped at Pak Ou cave.  Pak Ou are known for its many miniature Buddha sculptures. Hundreds of damaged wooden Buddhist figures are laid out over the rock shelves. At Pi Mai Lao (Lao new year) many people take Buddha’s to the cave as well.

The kayaking across the Mekong river downstream about an hour was not difficult, there are a few wirlkpools to avoid and boats coming up the river to the cave. It was a very enjoyable day kayaking. 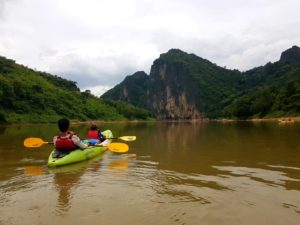 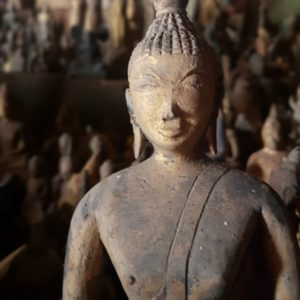 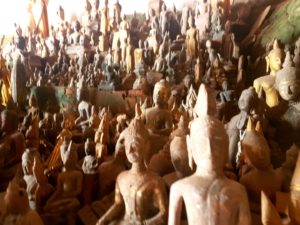