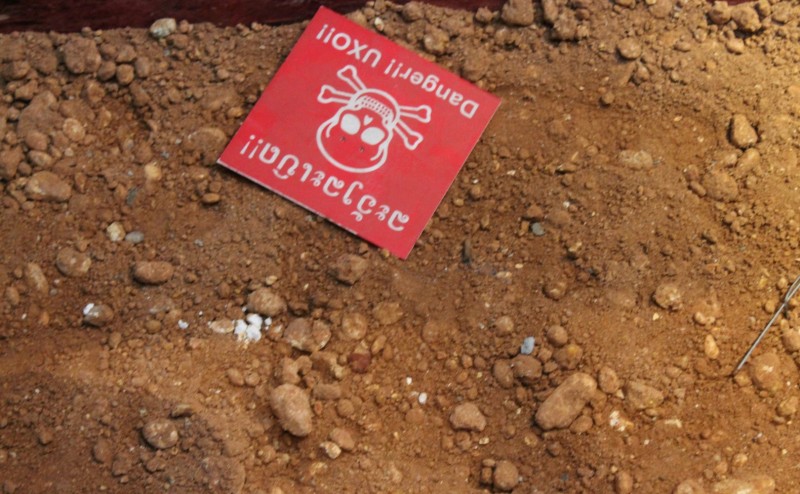 People dying in Laos from US bombs Unexploded ordnance (UXO) are explosive weapons (bombs, grenades and land mines) that did not explode when they were dropped and still pose a risk of detonation, decades later. About one third of Laos remains contaminated with UXO left behind from the Vietnam War – the most heavily bombed country in the world.

Cluster munitions are the small explosive devices released from cluster bombs. Although they are designed to explode on impact, cluster munitions have a significant failure rate (estimated at 30% in Laos during the Vietnam War). They are usually the size of an orange or soup can and can stay buried in the ground indefinitely. As a result, cluster munitions kill more civilians than enemy soldiers and prevent locals from redeveloping bombed land. Lao people call these “bombies.”

Few people seem to know about the Secret US War in Laos. The on-going effects in Laos are huge and very saddening to see people struggling every day with this rubbish littering their land and standing in the way of progress. Lao students receive education on how to stay safe from bombies at school but unfortunately for many children the tiny amount of money they receive for scrap metal from bombs is too tempting.

The CIA and Air America in Laos The CIA started recruiting mercenaries from among the native Hmong hill tribes to stop supplies from reaching the Vietcong and stop the infiltration of Laos and northern Thailand.  War with Laos and Cambodia wasn’t an option, so America’s involvement had to be kept secret, so everything was managed through the CIA-owned airline Air America.

Planes would drop rice on villages that offered warriors to fight their secret war. Once involved, there was no backing out. Quitting meant they were treated as an enemy or denounced. When more soldiers died off or abandoned America’s secret war, children were put in their place to fill the numbers. At the peak of fighting in 1971, about 40% of the soldiers were Hmong, and most were child soldiers, no more than 13 or 14 years old. Read more.