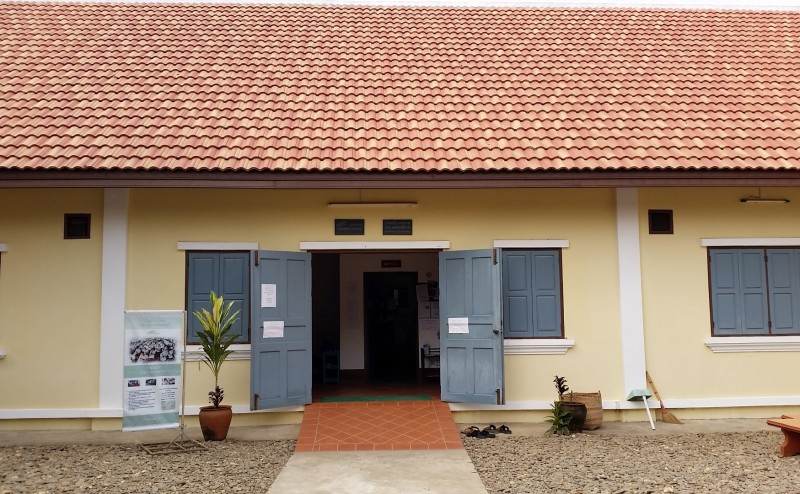 Laos through my eyes – Peter

A piece by Peter – LEOT trustee

It was almost by chance that I first visited Laos in 2008. My plan to visit Myanmar with my wife Catriona had been cancelled at the last moment due to changed advice from the Foreign Office.

With time off booked and nowhere to go I took out a map to ponder alternatives. It was almost through sticking a pin into a map I came up with the exotic sounding destination of Luang Prabang in Laos. Truly a Country I had little heard of and certainly knew nothing about. On research I found that Luang Prabang was a World Heritage city and had been part of French Indo China. It was on the Mekong and offered the opportunity to explore areas that were only just on the tourist map.

That first trip was like the start of a romance. Exciting with the feeling that anything might happen and no certainty of how it would end. I visited not only Luang Prabang and Vientiane but also the mystical Plain of Jars and the favourite of the back packers Vang Vieng.

The trip was made entirely by road and included stops at many small villages having trundled across many poorly maintained roads and tracks. I met not only native Lao people but also members of the minority communities including the Hmong, Khmu and Yao people.

I found that on my return home that the place had burnt a hole in my heart not only because the natural beauty of its scenery but because of the gentle charm of its people, their warm welcome, humour and openness. I had pictures in my mind of paddy fields, saffron robed monks and historic Luang Prabang.

This was the trip to change my life. I had been lucky enough to visit many different Countries as a tourist including most in South East Asia. Laos was a developing Country with many people still living a subsistence living. Could I do anything however small to make a difference?

I turned on good old Mr Google to help me with a search. I typed in UK charities working in Laos. The reply came back quickly. The answer for all I could see was one. A small charity called LEOT providing educational scholarships in Luang Prabang and Vientiane. Their web site had a phone number. I phoned it. My call was answered by Alan the Chair of LEOT. By chance they were holding a Lao supper in Alan’s office the following week. I agreed to attend and was enrolled as a supporter. This was the start of my Laos journey.

The start of 2009 heralded a second trip to Laos to meet the growing band of LEOT scholarship students based in Luang Prabang and Vientiane. Student numbers had risen to double figures and subjects being studied varied from teacher training to accountancy and from electrician to environmental studies.

It was great to be visiting with a real purpose and to meet a group of young people who were achieving so much despite coming from such deprived and varied backgrounds. 2010 was a year of further development for LEOT when its founder and Chair Alan Shiel moved to Laos following his retirement after his career as a senior university administrator in the UK.

Rather than sit in his garden in the UK Alan set about the task of expanding the activities of LEOT. The charity had been very fortunate in recruiting a very talented young Lao Homeland Director who was based in Vientiane to act as student mentor. Alan was able to expand this role supporting the students studying in Luang Prabang.

Numbers of scholarship students increased as funding was provided from visitors from all parts of the world. LEOT was nowhere meeting demand but was now supporting the educational funding of upward of twenty students.

Alan supported by LEOT treasurer Chris Hillman were not content with this success and started to look for premises in Luang Prabang to start a free English Learning Centre. Their search was thorough but difficult. Local property owners did not want to enter short term leases. Property owners were looking for long term agreements with all the rent paid up front. The fledgling LEOT was unwilling to meet these demands. It looked like the project was to fail before getting under way.

This was also a tragic year for me. My wife Catriona had shared and loved our visits to Laos. She had real empathy with all the students. Her death after a long illness was a great blow.

2011 was LEOT’s watershed year. It started with the scholarship programme in great shape. Student numbers were up slightly and we continued to have enquiries from both prospective sponsors and students.

Sadly our ambitions of setting up an English Learning Centre were at a complete stop. The answer was perfectly obvious we should buy land and build it ourselves.  I persuaded daughter Claire who is a solicitor in the UK to join me on a scouting mission to Laos. We arrived to find that Alan had spent time in identifying land.

Peter Banwell’s family sponsors Miss Yaher to study in the program where she hopes to become a teacher.

The main difficulty was the lack of a structured markets and land was identified by simple boards and mobile phone numbers.  Buying property in Laos is not like the UK it’s difficult to establish price and ownership and to overcome the problem of a ban on foreign ownership.

I’m proud we overcame all the problems and shortly after returning home LEOT completed the purchase of a plot of land on the edge of the World Heritage zone.

The project was now moving forward. Plans for the school to meet UNESCO requirement were commissioned. By early autumn the land had been cleared. I returned to Laos with my daughter to assist Alan with the tendering process to build the centre.

We received seven bids of which three were particularly well written. We met each party and viewed some of their completed work. We entered negotiations with a local firm. We wanted maximum value for the Laos economy so would accept only Laos labour. The contract was completed shortly before we returned home. Building work started on Christmas Day 2011 with expected completion in twenty four weeks.

2012 started with footings and the building shooting sky wards. I visited at Pi Mai Laos to find the project was well on track. Despite the warnings by many of delays and problems our builders kept to their word and our building was completed on time, budget and quality. The building is a real testament to our builder and his team.

Thanks to the generosity of an Australian benefactor fitting out followed on quickly to give us fine facilities and a library/computer study area.

My next visit was by far the most important. It was September 2012 when I attended the opening of The LEOT English Learning Centre accompanied by both my daughters and son in law Glen. It was a very special day.

The Centres was planned to take eighty students. Over the three days of enrolment we interviewed over one hundred and sixty candidates. We agreed to increase the intake and accepted one hundred and twenty students for the 1st October the first day of teaching and the last day of my visit.

Six months have now passed and it’s the end of March 2013. It’s the last day of my visit to Luang Prabang. The LEOT Centre is progresing well. Numbers have risen and we have one hundred and thirty five students studying English. Every day brings requests from new applicants

As a UK business man I love my time in in Laos. It’s very different  from home. I’m sure LEOT is now making a difference in helping disadvantaged students learn English.

It’s so strange to walk down the street and have students get off their bikes to walk alongside me. I cant believe that they address me as teacher. It’s a great honour. I’ll try not to let them down.

Waiting for the nose swab PCR test
I guess no timeline would be complete without a few COVID19 pics⁠
Catching crickets in the village with a sticky bamboo pole⁠
In search of love 💗⁠
Hiding from the sun⁠
View from Le Grand Hotel in Pakbeng, Northern Laos. Great hotel with pool overlooking this magic view.⁠
View: This view is taken from Wat Siphoutthabath, part of Mount Phousi, looking down to the Kam Khan road which runs down to the end of the peninsula and bends left to meet the congruence of the Kham and Mekong rivers and then follows the Mekong River.⁠
View: The High Street or Night Market street. Every evening this road is transformed into the LPB Night Market with local vendors selling a range of locally made and imported wares from textiles, paintings, bowls, silverware, clothes and bamboo products.⁠
Rosie and Buddha at Mount Phousy for a morning walk⁠