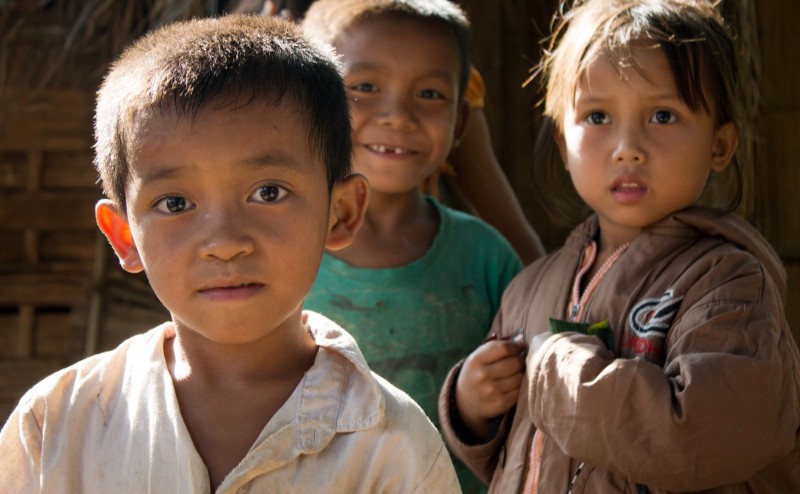 Thailand promotes itself as amazing, Vietnam can well be described as bustling, Cambodia’s Khmer temples are awe-inspiring… but the adjective that was most often applied to Laos is forgotten. Visitors who are drawn by the laid-back lifestyle and the opportunity to watch the sunsets on the Mekong will simply explain the attraction by revealing that the true meaning of “Lao PDR” is Lao – Please Don’t Rush. Laos, officially the Lao People’s Democratic Republic, is a landlocked country in Southeast Asia, bordered by Burma and China to the northwest, Vietnam to the east, Cambodia to the south, and Thailand to the west. It is a small socialist country with 7 million people and very poor. It’s unclear sometimes where it is going as it beats by its own rhythm.

It has 2 main centers for tourists. You can fly internally but if you venture to other areas mini-van is the mode of transport, across slow pot-holes roads. Much of the land is still littered with unexploded bombs from the Secret US war (1960-1975) with 100-300 casualties still occurring every year. Laos is the most heavily bombed country in the world.

Many families live in a simple bamboo hut with one room, no electricity and a fire to cook with in the countryside. Food can be scarce at times.  Reports show most Lao people have never even left their provinces so have nothing to compare their lives to, however my experience in the larger centres are that people are seeing more of the outside world thanks to the Internet and mobile phones – which is the choice of technology there.

It doesn’t sound that appealing does it? Oh did I mention the interesting array of food which tends to be the most spicy I’ve ever eaten. The food is beautiful, basic and fresh with a few odd balls thrown in like insects, river snails, rats, fermented fish

So what is it about Laos? Many tourists visit Laos as part of Thailand, Myanmar, Cambodia and Vietnam and often people will rave about Laos – the quite, sleepy place that closes at 11.30pm for the Government curfew at midnight. What draws people to Laos? It certainly could be the breathtaking landscape, or the ancient temples but I think most would agree it is the people. There is a strong focus on family and being together here. Families and friends gather around, all sharing food, eating sticky rice with their hands, listening to music (usually almost through loud a PA speaker), or iPhone over a glass if desperate … and drinking Beerlao.

There is little crime although increasing. There are problems, lack of education, to many drugs etc however everyone is welcoming and locals never seem to make you feel like a ‘Falang’ (a white foreigner). Sure you are expected to pay much of the time but are always made to feel like a local, and the experience of Lao culture is worth it. it never ceases to strike me how such poor people seem to be much happier with nothing than Westerners are with everything.